I was out with a group of friends a few years ago for a meal in a restaurant. During an interlude when the two women present talked among themselves, my male friend and I began talking about our work that week.

After a few minutes of me sharing my working week my friend turned to me and said, “You’ve got it all wrong Wallace. The dog population in Ireland is booming. You should be in a business connected with dogs. That’s where the opportunity is.”

He hadn’t realised it but he had just advised me to put my ladder against the wrong wall.

And most people do exactly what he had advised. They look for an opportunity, and if there is money in it, they go for it - whether it be going for a job or starting a business. In other words, they create their life from the outside in. They spot an opportunity in the world around them and they take it. Then they wonder why they are not happy?

Living this way will never make someone happy. We must, as the title of this blog suggests, create our life from the inside out. This means that our life is inspired from within. To live this way we must first plunge deep inside and cry out for help. We need to ask from the depth of our soul what purpose we were born to serve. And then listen intently for an answer.

In my own case I had given up working as a life coach because it was too demanding of my energy. I had an energy deficit at that time due to the side effects of living with a mental condition called schizophrenia, a situation I had lived with for the previous 30 years. When I decided to let go of my dream of becoming a life coach I began to explore starting a business with a friend. But that wasn’t going very well so I took a break from it and drifted purposeless at home for about 3 weeks.

In time an urgency arose in me to find the way forward. So I went up to my meditation space and prayed earnestly, sending out a cry from my heart to be shown the way. And surprisingly my call was answered.

A discarnate voice spoke in my ear and said, “You can do what you like in the world of business but you will not make a single cent!” I was completely taken aback, not knowing whether to be more surprised at hearing a discarnate voice speak to me or at the advice it had offered.

So I carried on praying. I asked, “Well what should I do then?”

The voice came back, as clear as a bell, and said with unmistakable authority, “You are to awaken people spiritually.”

Forgive my skepticism, for having just heard what to all intense and purposes was the Voice of God, but I felt compelled to challenge this advice, for “awakening people spiritually” is not known for delivering financial rewards and I was in considerable debt at that time. So again in the prayer state I asked, “How am I to pay off my debts doing that?”

The Voice never came back.

However I arose from my prayer session with a new fresh energy - at last I had a clear direction. So I returned to my life. As I did so I found that things began to fall into place in new and surprising ways. I realised I was being “helped”. Not the sort of help you might expect, but help of a spiritual kind, that is difficult to explain, because it is subtle and invisible. So let me give you an example.

A few weeks after this happening I saw a business card lying on our kitchen table. It was the card of a spiritual healer. Now I am not given to regular visits (or even occasional visits) to spiritual healers, but something inside me nudged me to go to this healer.

A week later I found myself walking down a garden path to a small shed. I entered to find it bedecked as a beautiful healing room. I was invited to lie on the plinth. The spiritual healer placed her two hands on either side of my head and never touched me. She stood in this position for about 45 minutes and then said if I wanted I could release the karma from 4 past lives. I consented and felt very little change, but she went through each past life in turn and asked if I wanted to release the karma. In each case I agreed.

Then at the close of the healing session, she said the angels in heaven were all rejoicing because of all the good I would bring into the world. Then she sat down and rested, saying it was the most powerful healing experience she had ever witnessed!

I went back to my car and wrote down what she had told me about those 4 past lives and then drove home. That day and for the next 3 weeks I was absolutely exhausted. However my energy eventually returned, and when it did to my surprise I discovered I had about 4 times the energy I had prior to the healing. Then as this increase in my personal energy continued I realised I had been healed of the worst side effects of living with schizophrenia, something the medical people thought impossible. (I had been told by a psychiatrist at age 32 that I would “probably never work again”.) And so I could now go back to work.

As I did so I was delighted to discover I was being guided every step of the way and my life began to open up in the direction the voice had commanded. I began, along with my friend Peter Shepherd founder of the Trans4mind website in France, to create a project that had the power to help awaken the consciousness of humanity. Its vision is “To make the human heart visible in community, world-wide, by harnessing the full potential of the Internet”.

Most surprising of all is the huge healing effect working on this project has had on my own personal wellbeing. Today, even though I have schizophrenia, I often rise at between 4-6am, put in about 60 hours work a week some weeks and have more energy than I’ve ever had in my life! Then a couple of months ago I had my first breakthrough, with our online training being accepted in principle to be run in a 400 employee company.

Furthermore I can feel this spiritual energy buzzing and flowing through my body, expanding my creativity and powering my passion. I have never felt so blissful and content.

“Ask and you shall receive.” 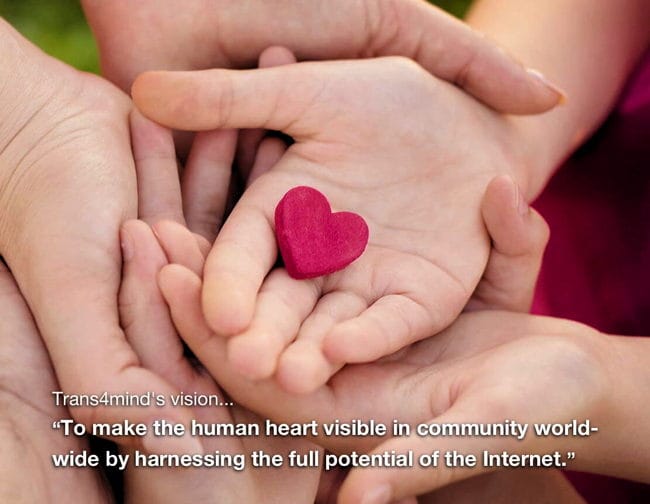