A New Dawn and “The Only Revolution”

In my conversations here in Dublin with people at the cutting edge of personal development I talk a lot about a new dawn and what we, here at Trans4mind, call “The Only Revolution.” Many are amazed by what they regard as my unrestrained optimism and some think me naive and even suggest that society is going backwards.

But is this so?

Remember “The Only Revolution” will not be televised. This is important because so much of what we give credibility to is highlighted over the broadcast media. And we are so conditioned that most of us consider, if it isn’t being featured on television then it can’t be happening.

Consider this for a moment. What is the most powerful agent of change on the planet? It's personal acts of kindness between individuals. Are these featured on television? Like the sun rising each day: a new dawn is not news. It’s similar with “The Only Revolution.” These are the personal characteristics of those engaged in instigating this seismic change to a new global society…

Think for a moment… How often do you see people with these characteristics in the broadcast media?

The television companies need people with the following qualities…

How often do you see people with these qualities in the broadcast media - a lot right?

So that’s what the media feature - not exclusively, but 95% of the time.

Remember too that the vast majority of people who are watching the broadcast media have a 3D or materialistic, survival-based consciousness and they love all these ‘loud’ qualities in their programs, because they cause excitement and emotional volatility - to the 3D consciousness, peace is an alien experience and not one that is welcomed. If you would like to see evidence for this simply look at a group of people in a bus queue - chances are most of them will be busy on their phones. They can’t abide simplicity and stillness for even a moment.

However if you really want to see the power of “The Only Revolution,” type any of the first list of qualities into Google and it’s all there - millions of courageous people working away quietly to transform our world. And just like the awakening of a new day, they are spreading their light unnoticed by the mass of society.

So do not be fooled by what is on show and has the most prominent exposure. Open your mind to a new dawn, look for the points of light in the dark places, and you will find them everywhere. Then eventually the rising sun will break the horizon and, spectacularly, the whole Earth will be flooded in light. The Only Revolution. 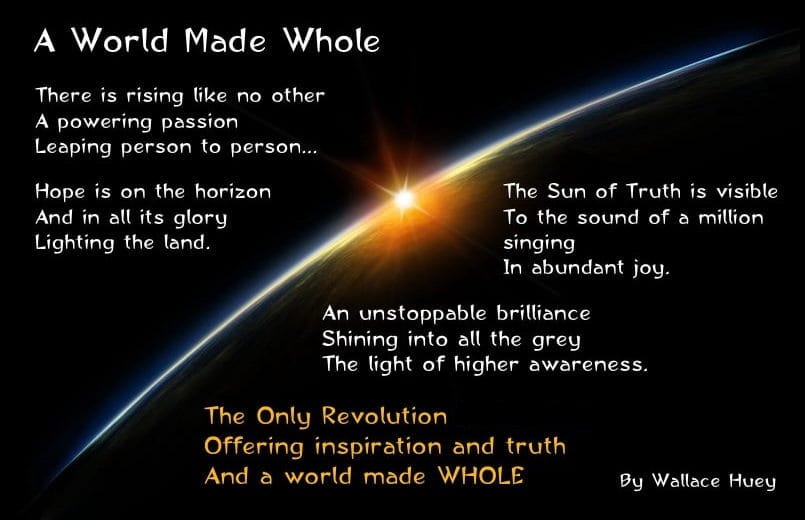