A Woodsman's guide to enlightenment
By Wallace Huey
Audio of this Chapter:
Download the MP3 audio file
Being guided from within

Sarah was sitting quietly in the Woodsman's bedroom. Maeve had let her in a few minutes earlier. She had crept into the bedroom like a little mouse. Now she sat with her head down staring silently at her feet.

The Woodsman recognised Sarah from her delicate facial features and white skin. Sarah, he remembered, was the young telephonist in the community's office building. He often saw her when he went in to collect his post, but the two had never spoken.

The Woodsman was intrigued as to why Sarah was one of the first people to visit him and why she was now so silent. Unbeknown to the Woodsman, Sarah had secretly admired his calm inner strength and had made a promise to herself that she would one day confide in the Woodsman a secret she had kept from every member of the community. The Woodsman gave her the time and space she needed to gather courage.

Sarah was aware the Woodsman was dying, but she could also sense his incredible presence and knew that, even on his deathbed, he needed nothing from her. In contrast her own need was great and had risen in urgency with the news of the Woodsman's immanent demise. So, raising her head, she spoke…

“I have seen you come into the office many times over the years,” said Sarah, “and I always wanted to speak to you but never had the confidence. Then when I heard you were dying I knew I had to come over and see you…..” Her head sank again.

“Go on,” said the Woodsman, in a voice of tender command.

“I never told anyone in the community in case they would think me unreliable, but three years ago I had what I now know was a mental breakdown. I was working for local government at the time doing secretarial work. The office was very badly organised and this put a huge strain on me. Everything got on top of me and I couldn't cope.”

“Then around the same time I had to go in to have my gall bladder removed. Before the operation I was supposed to rest and prepare myself for the medical procedure. However I have always had a perfectionist streak and a keen sense of duty and I was unable to leave my post with the files in a mess. I knew the person who was to temporarily step in and look after the filing would be in a terrible muddle. So before the operation I worked extra hard, leaving the office the night before the operation at 11-00pm.”

“On the morning of the operation I was completely exhausted. The operation was a success, but I have never fully recovered. My body has healed physically, but I can no longer cope with even slight levels of stress. I get all panicky and my brain goes into a spin - then I can't get the job done. Ever since I have been exploring ways to help myself - I do a bit of yoga, take exercise, watch what I eat and manage my life to avoid stress.”

“The terrible depression I suffered after my operation has largely gone, but I want to feel strong again. I want to rise in the morning with a spring in my step. I have lots of ideas as to how I can get help. I'd like to get reflexology treatments, combined with Indian head massage. I've heard ayurveda is good.” Her eyes were lighting up now as she spoke. “Then there is meditation, I'd like to try that and I'd like to do a training course on getting in touch with my intuition and….”

Sara had now become animated, talking in a continuous stream about the many therapies, training and treatments she wanted to explore. While she was talking Maeve brought in a pot of tea and left it on the table between Sarah and the Woodsman.

The Woodsman let her continue for a while in her now lively delivery then asked, “Would you like a cup of tea?”

“Yes please,” Sarah replied, and continued listing the many courses and treatments she was going to follow.

The Woodsman propped himself up in his bed with difficulty because he was in pain, one arm on the bed and the other reaching across to where his hand clutched the tea pot. He poured Sarah's tea as she continued to talk. When the cup of tea was full the Woodsman continued to pour until the tea was flowing over the rim of the cup and into the saucer.

Sarah immediately ceased her animated delivery and cried out, “Wait, wait, stop! What are you doing?”

The Woodsman stopped pouring. Sarah fell silent for the first time since she had started talking. The Woodsman gazed lovingly into her eyes.

“Have you ever walked up the woodland path beside the avenue?” he asked - tenderness surrounding every word.

“There's no space to walk through Hill Top Wood,” she replied.

“And what else do you like about walking through the path in the wood beside the avenue?”

“As I walk I take in the birdsong at dusk, the ferns in winter and the bluebells in the spring. I love watching the waterfall when I cross the footbridge.”

“As you walk in the space surrounding the path you stop and appreciate the stream and each flower, tree, bird and animal. Then you enjoy walking the path and know the best route to take,” replied the Woodsman.

Sarah's animated expression vanished, replaced by a new more reflective countenance. She sat quietly and sipped her tea. When she was finished she had nothing else to say. The Woodsman understood and the two sat embracing the silence.

After some minutes of silent communion, Sarah thanked the Woodsman and quietly left the room. 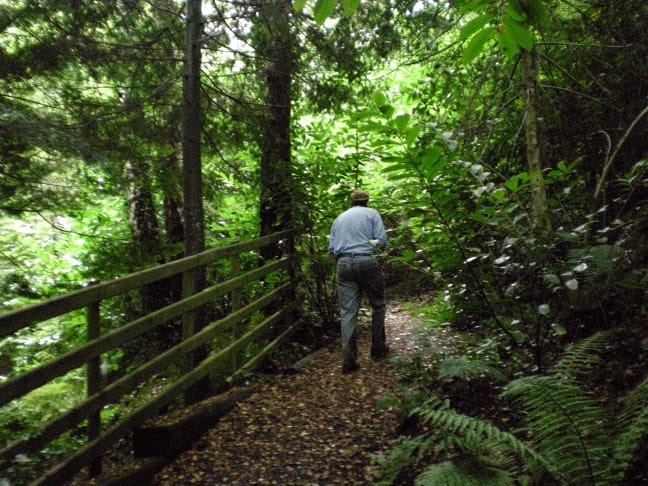 Contents:
Home Page
Introduction
Healing yourself
Cope with loss
Be a person of integrity
Achieve success
Master Money
Be non-judgmental
Nurture your children
Understand death
Living consciously together on earth