A Woodsman's guide to enlightenment
By Wallace Huey
Audio of this Chapter:
Download the MP3 audio file
Nurture your children

The Woodsman continued to cough, while Claire sat and watched uncomfortably. She had felt strongly drawn to visit him, while also dreading the prospect of such a visit. Left to herself she would never have come near the Woodsman, for she hated anything to do with sickness and death. Her husband, Bill, had died four years previously and she had never fully recovered. Seeing the Woodsman in such distress was dredging up that past event from a place she did her best to forget, until now it lurked prominently in her memory.

Claire had felt this powerful and compelling urge to visit the Woodsman, despite all her misgivings, because she had heard his presence helped others and she badly needed advice on raising her only son, Jonathon. Ever since her husband had died she found it increasingly difficult to have an open, trusting relationship with Jonathon, and now she was waiting patiently.

The Woodsman's coughing subsided, and after spitting out a combination of mucus and blood, he once again felt the urgency of life. He pointedly asked Claire why she had come. Claire felt a profound sense of relief at hearing the Woodsman's invitation to unburden, because although she sensed his strength and power, she was reluctant to talk about her own problems to a dying man.

The Woodsman remembered her son because he had occasionally helped him to split logs and had shown a keen interest in the woods….he never forgot anyone who cared about the community's woodland. He knew her son to be a bright eyed, enthusiastic, 18 year old, who was always dreaming of far off places.

“Carry on,” said the Woodsman, gently and firmly focusing her on the reason she had come to see him.

“I can't control him anymore,” Claire spluttered. “He has his head in the clouds and he is so full of energy. When Bill was alive he used to kick ball and use up Jonathon's energy, but now I don't know what to do. I look after him, protect and shelter him, feed him and do all his laundry, but he is so ungrateful. We argue all the time. I have brought him up to have the right values and to know right from wrong and now I am afraid that with all his energy he will get into trouble. He wants to go travelling with some friends on inter-rail around Europe this summer and I have refused to let him go. I couldn't bear the worry and stress of not knowing what he is up to. I am at my wits end.”

Claire surprised herself with the frankness of her unburdening, for she rarely shared such thoughts with anyone. However, although she barely knew the Woodsman, she felt her words and the pain they carried drawn from her by an invisible force - flowing out from her into a sacred, warm place.

The Woodsman thought pensively for a moment…..then he raised his gaze and seemed to Claire to be looking into a far off place - a place he knew but few others had ever seen. He held that far away look in his eyes for a few minutes then returned his gaze, along with his awareness, to the room.

“When I had my health, every week during the winter, I would go walking with the Binian Ramblers in the Mourne Mountains,” began the Woodsman. “There was one particular walk I loved, where we would stop at the crest of a ridge and sit on large boulders to take our lunch. From that ridge I could look out across the mountains. On the next hill there was a forest that climbed the slope but stopped short of the crest of the ridge. I was always intrigued by a single conifer that broke the skyline. It grew on the very crest of the ridge far above the forest below.”

“One weekend I was on this favourite Mourne walk after a fierce midweek winter storm. While stopping for lunch at the boulder I gazed at the ridge beyond, even more intrigued than before by the solitary conifer on the skyline. I noticed that many of the trees on the lower slope had been blown down on mass by the wind. It was as if a giant hand had pushed them flat upon the earth. But that single conifer, on the very top of the ridge, was still standing. I asked myself why this solitary tree had withstood the full blast of the storm, when so many of the trees in the forest below, had fallen with the wind.”

“For a moment this phenomenon remained a mystery to me. Then I received profound insight. The trees that were all huddled together below the top of the ridge had never faced any difficult circumstances. They had been sheltered from the gales and the winds. So when a really big gale came they all fell because they had shallow roots. But the tree on the top of the ridge, even though it bore the full brunt of the storm and stood alone with no shelter, survived the onslaught intact. The deep roots and strong branches that it had grown as a result of being exposed to other lesser winds and gales had carried it through the previous week's big storm.”

The Woodsman's gaze rested knowingly on Claire. She sat silently - communicating through the moving lines of her face. He empathised as she went through a series of mixed emotions, surprise, followed by shock, fear, sadness and tears. The Woodsman maintained his silent vigil while Claire passed through her emotional rite of passage.

Eventually Claire's tears subsided and a fresh young expression threw her face open. The room was blessed with smiles and a buoyant “thank you” as with a spring in her step, she crossed the bedroom floor and left the room. 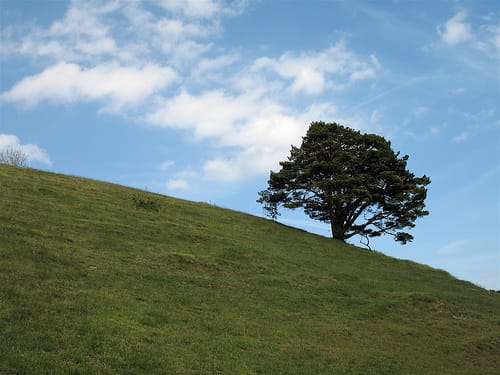 Contents:
Home Page
Introduction
Healing yourself
Being guided from within
Cope with loss
Be a person of integrity
Achieve success
Master Money
Be non-judgmental
Understand death
Living consciously together on earth